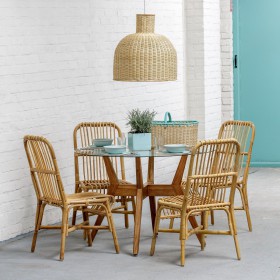 All our Vintage rattan furniture reissued as new, using KOK’s original designs, just as they were made in the 60s.

How do you define “vintage rattan” at KOK?

By definition, the term “Vintage” includes all antique furniture from a particular period that can be found in antique fairs, antique dealers or private homes. As the current fashion is for 50s-60s retro, the term “vintage rattan” spontaneously refers to that period, but the same could be said of vintage rattan furniture from the 1900s or 1930s, for example. KOK, as a manufacturer, offers you not antique rattan furniture, but reissued new rattan furniture, made using our old designs. We carefully kept our old designs in the attic. Our sun mirrors, Corbeille beds, diabolo tables, Coquille armchairs... have been reborn from their ashes to the great delight not only of today’s aficionados but also of KOK veterans, who can’t believe their eyes!

Characteristics of vintage rattan from the 60s

Up until the 50s, rattan armchairs were mainly woven, but as time went by, the lines and processes became simpler. The highly convoluted and 100% hand-made style of the belle époque (at the turn of the century) was followed by a more refined style in the 30s, which already used mechanical weaving (Lloyd Loom). At the end of the 50s, this weaving was discontinued entirely and replaced by rattan “sticks”, thin rods fixed to the structure to give the shape of the armchair, all in unpeeled rattan. These nets are not only more robust than the weaving of yesteryear, but, above all, much quicker to use. They characterise the typical style of the 60s: light, openwork, robust products, with their unmistakable light golden brown colour and the darker knots of the rattan vine. This “modernist” approach to rattan was first introduced in the Netherlands, the historical importer of rattan, by all the craftsmen in Noordwolde, from whence it should be remembered, Pieter KOK, the founder of KOK in France, originated. With such family connections, it is not by chance that KOK was the establishment at the forefront of the manufacture of these stick products in France.

The golden age of vintage rattan

The combination of several factors is what made this style of rattan, which was called “Manila” at the time, exceptionally successful. As we have just seen, making a rattan armchair with sticks was quick and less expensive. Rattan seats at that time were, therefore, very affordable. Compact and versatile, their space-saving size meant they were highly suitable for the new housing constructed post-war. Without having the exotic connotation that we attribute to them today, they were also perceived as leisure furniture, linked to holidays, relaxation, the outdoors, in short, a relaxed and playful style, well in tune with the carefree spirit of the thirty post-war years. Finally, they were distributed everywhere, from the neighbourhood basket maker to Parisian department stores and by the travelling salesman who crisscrossed the most remote areas of the countryside. They were manufactured everywhere too. From the north of Scandinavia to the south of Spain, a plethora of workshops of all sizes nourished and supported thousands of rattan vines. In the mid-70s, the first imported rattan furniture (Pier Import style, “Emmanuelle” armchairs) would thwart this beautiful trend, offering a new exoticism at unbeatable prices.