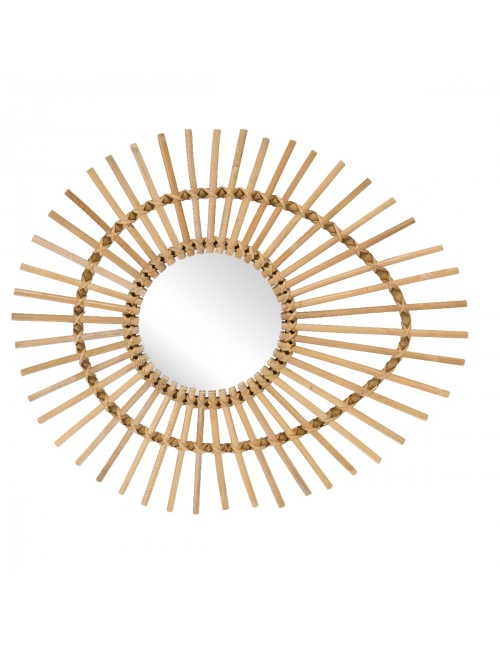 The Ellipse rattan mirror in just a few words

Here is the oval version of the famous Soleil rattan mirror from KOK MAISON. A thoroughly Vintage look with its motif that will remind those who remember of the "first TV channel” in black and white, and the famous ORTF clock. Overall dimensions 74 x 64 (with spokes). Diameter of the mirror alone: 24 cm. Frame in natural rattan, mirror on plywood background, made in Indonesia.

The history of the Ellipse rattan mirror

To everyone's amazement, on December 24, 1959, the French TV channel ORTF launched a brand new clock, a spiral-shaped timepiece calibrated to fit the 4/3 screen format of the time. Designed by Christian Houriez of the Boulle school and his students, this image would leave its mark on the minds of a whole generation of television viewers. In this blessed period of commercial-free TV, the clock appeared on the screen to fill in the many programming gaps, the "technical hitches”, and as a preamble to each important program. It is therefore quite understandable that Pieter KOK, firmly rooted in his era, was able to capture this television phenomenon in order to create an oval version of his Soleil mirror. The spiral has disappeared, it was time to place the round mirror in the middle, but the general physiognomy and the spokes are there. The Houriez clock disappeared at the end of 1974, at the same time as the ORTF, the little interlude train, and Catherine Langeais' impeccable French. Free contemporary art as a wallpaper, trains bearing riddles in prime time, and the reign of the announcers would give way to advertising, jingles and American series. Ellipse mirrors, The Soleil, Corbeille beds and other things like Coquille armchairs would also give way to imported rattan, Pier Import-style, only to reappear today, like delightful childhood memories, thanks to the enthusiasm for the "vintage sixties". Symbols of an era when we still knew how to "take our time", we paradoxically still find them very modern.

The Ellipse rattan mirror in practice

Like the original models, the Ellipse rattan mirror is not equipped with a hanging or chain system. It can easily be hung from a small hook or bracket that you have found elsewhere on the market, and previously fixed to the wall or behind a door, by second loop of rattan. Supplied in an individual cardboard box.

Based on 2 customer reviews

Did you find this helpful? Yes 1 No 0

Did you find this helpful? Yes 1 No 0